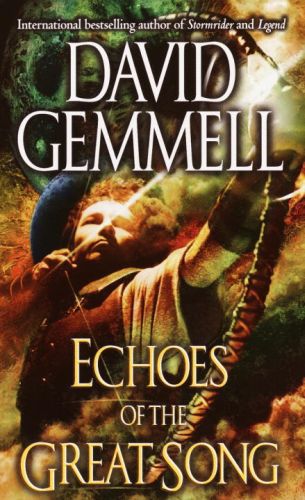 Echoes of the Great Song

Yes'>#8220;A HUMDINGER . . . A MASTERLY TALE TOLD WITH CLARITY AND VERVE.yes'>#8221;yes'>#8211;The Times (London)The Avatars are immortal and live like kingsyes'>#8211;even though the empire is dying. Their immortality is guaranteed by magic crystals whose influence is now waning, overwhelmed by the sheer power of a great flood and a sudden ice age. But when two moons appear in the sky, and the ruthless armies of the Crystal Queen swarm across the land bringing devastation and terror, the Avatars unite with their subjects to protect their universe.As the cities face imminent destruction, three heroes emerge. Talaban, a warrior haunted by tragedy; Touchstone, the mystic tribesman seeking his lost love; and Anu, the Holy One, the Builder of Time. And when all seems lost, two others enter the fray: Sofarita, the peasant girl who will inspire a legend, and the madman, Viruk, who will become a god. . . .From the Paperback edition.